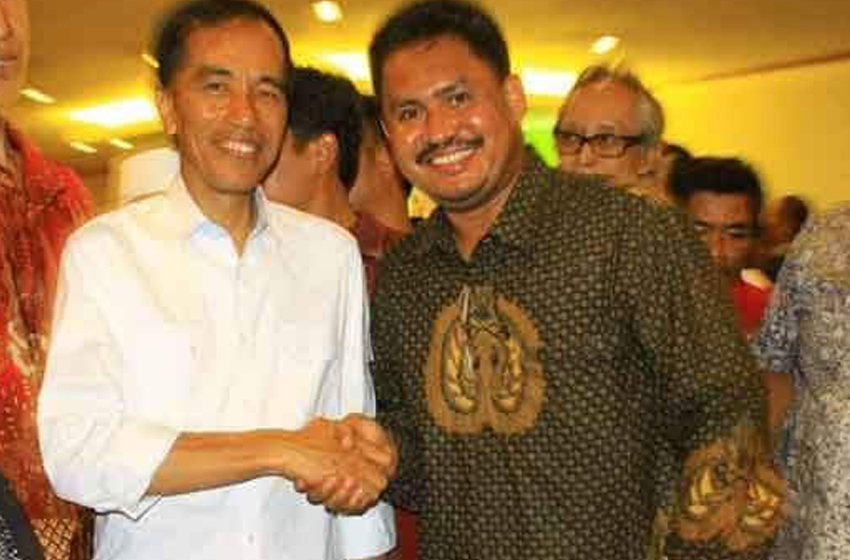 JAYAKARTA NEWS – Egy Massadiah was born in Sengkang-South Sulawesi 27 December 1966. He is a multi-talented figure who happened to start his career in journalism. His expertise in knitting friendships is dedicated to the benefit of society.

His name is catching on in the world of mass media, theater stage, cinematography, and various other fields of activity. It includes his latest work in assisting Lt. Gen. TNI Dr (HC) Doni Monardo as the Chief Expert of BNPB (2019 – 2021).

Egy was born to Bugis parents, from Sengkang Wajo. The adventurous and wandering spirit, which the Bugis call ‘sompe’, underpins Egy’s moves, steps, and breath. During elementary school at SD (Sekolah Dasar – Primary School) 2 Teladan Sengkang he was active in scouting. In 6th grade, he won a quiz, which was broadcast on the Makassar TVRI station.

He migrated to Jakarta in the ‘83s when he was still young. Of course, you may never think a “snotty kid” would be brave to come the capital city with nothing. But, yes, he traveled anyway with nothing but DOT. It stands for dengkul, otot and tekad, which means knee, muscle, determination. In Indonesian, that means you rely on nothing but yourself.

Then Egy Massadiah occupied a position in the editor of a tabloid (Wanita Indonesia, author).

Then Egy Massadiah is known as a theater/film actor, director, even producer (theater and film).

Later, Egy Massadiah is also known as a book writer.

Later, Egy Massadiah is known as a young leader of the Golkar Party, especially during Chairman Jusuf Kalla’s leadership.

They are all destiny in life. Indonesians would also call it the “hand lines”. (It refers to the lines on our palms. But it analogically reflects that those lines could show our future destiny)

Have you ever heard of the term “Jakarta is so cruel….”? Young Egy was immediately beaten hard and cruelly by the capital city. Such a ‘capital cruelty’ was even made into a film titled “The cruelty of the stepmother is not as cruel as the capital”.

He tried his best to survive. He did whatever he could. There went Egy, having experienced a series of lowly professions. He became a driver, a stage porter, a stonemason, a housemaid, and a street busker.

However, his determination to ‘conquer’ Jakarta was so passionate. He would not go home before becoming “somebody”. Therefore, whatever type of work he did, he conceived that as a steppingstone to reach his dream, high beyond the sky.

“In principle, don’t show the pain and bitterness of this life while you are still struggling. (Share the story about them) Later, after you have gone through all that,” he said.

The storyline of his life began to follow the path according to his dream when he pursued a career in the world of theater. Having joined several theater groups such as Adinda and Belinda (Yose Marutha Effendi – Renny Dajoesman), Egy was, in the end, tied up with Teater Mandiri, which Putu Wijaya chaired, in 1983.

Egy showed his totality at Teater Mandiri. He helped with various theater productions and roles. The philosophy of Teater Mandiri, “Starting from what exists,” he has held as a guide in his soul and mind.

As a good “cantrik” (follower), Egy was always hungry for knowledge. He participated in all discussions spanning across fields, ranging from culture, social, politics, and life values at the Mandiri Theater studio. He attempted to follow the path of Putu Wijaya, who was and is a prolific writer.

Egy then studied and practiced writing. He has since been writing literature, opinions, and journalistic reporting.

So did Eggy. He squeezed out ideas and poured them into a line of sentences. The paragraphs were then transformed into a sharp narrative. It was presented as an article, or reportage, expected to conquer the heart of editors in the targeted media.

Editors are executioners who decide the fate of freelance writers. If it passed the editor desk successfully, it would be published in the newspapers the next day. If not, then the fate of Egy’s writing ended up in the wastebasket.

Egy felt how to pass the day anxiously about when his writing would be published. It was not only a sense of satisfaction. But there was the hope of “breath”. Yes, the breath of life.

Finally, he was accepted to work as a freelance journalist at Pelita Daily. The dynamics of work were getting denser and more routine.

Dedicated to building his journalism career, he later moved to another media outlet, the Indonesian Women tabloid, established by Siti Hardiyanti Rukmana or Mbak Tutut. His last position was Managing Editor.

He proved his achievements in creative writing by winning an essay competition for Indonesian American Cultural Diplomacy during the 1987 KIAS (Kebudayaan Indonesia di Amerika Serikat – Indonesian Cultural Show in the United States). Egy received an honorarium of Rp75 thousand, which was quite an award for its time.

In 2013, Egy wrote a book titled Bung Karno Ata Ende with Roso Daras. This book was part of the 2013 film titled Ketika Bung di Ende (When Sukarno in Ende), in which Egy acted as a producer.

In the last two years (2019 – 2021), Egy has been prolific in writing. He wrote two books with interrelated stories: Secangkir Kopi di Bawah Pohon (A Cup of Coffee Under a Tree) and Sepiring Sukun di Pinggir Kali (A Plate of Breadfruit on The Riverside). The two have the same sub-title, “Doni Monardo’s Journey to Protect Nature” (2019-2020).

“There are several other books that are still in the process of being written, and God willing, they will be launched in 2021,” said Egy one day.

In between his journalistic duties, he was active as a theater performer in the Mandiri Theater group. By itself, the world of theater brought Egy closer to the world of acting, both on-screen and on celluloid.

He appeared in soap operas entitled Abad 21 (21st Century) (Indosiar), Kerinduan (Longing) (Indosiar), Perlu Ada Sandiwara (There needs a Drama) (Putu Wijaya – TPI). He also appeared on several FTVs that aired on SCTV and RCTI. All of them were in the ’90s. As for the TVRI soap opera Rumah Masa Depan (House of the Future) by Ali Sahab, he acted in the ‘85s.

As a stage producer, he produced the play “Mega Mega” by Arifin C. Noer at the Gedung Kesenian Jakarta as part of the 2013 Art Summit International Festival and another similar performance in Singapore. He even brought Putu Wijaya’s play titled BOM play to Slovakia and Shanghai China in 2012 in collaboration with the Jakarta Art Institute.

His totality in the world of theater is shown by making various innovations. One of Egy’s ideas is striping theatre. The term stripping, commonly used for soap opera series, was applied by Egy in the theater world.

“The goal is how theater arts can contribute to the formation of the character of society, as well as an icon of the nation,” said the man who graduated from Paramadina Graduate School with a master’s degree in communication.

Egy is ambitious to make theater a place that cultivates the young generation of Indonesia to be ready to develop the Homeland. To Egy, life and the state are like a theater stage that requires tenacious, loyal, and well-trained manpower. They are not only intelligent but also wise, agile, and highly sensitive to humanity.

Theater indeed covers almost all branches of art and various aspects of other disciplines (psychology, philosophy, history, politics, law, and even economics, etc.). It can become a training workshop for those who want to become theater workers and all other professions, both workers and leaders.

Because of that, Egy has never turned away from that he was born out of the tense world of theater. It proves that in the world of theater, other disciplines of knowledge are also developing. His commitment to the theater world has led Egy and Teater Mandiri to successfully captivate the international audience in New York Off-Broadway, Seattle, Connecticut, San Francisco (1990), Singapore, Cairo, Tokyo, and the Czech Republic. Also, in Slovakia, Hong Kong, and Taiwan, etc.

In the world of films, Egy then produced the film titled Lari dari Blora or Fleeing Blora, starring WS Rendra, a well-known Indonesian artist. It is a movie that speaks about the culture of the Samin tribe in Central Java in 2007.

In 2013, Egy became the producer of the film Ketika Bung di Ende or When Sukarno in Ende, featuring Baim Wong (Bung Karno), Paramitha Rusady (Inggit Garnasih), and some other veteran actors, like Tio Pakusadewo.

After the Bung Karno film, he another national hero movie about the Prince Antasari from Banjarmasin. In 2017, Egy was trusted to be the producer of the movie, titled “Haram Manyarah Waja Sampai Kaputing”.

Prince Antasari’s film was produced with more than 70 percent using the Banjar language. According to Egy, the use of local languages is vital in moviemaking because, according to Egy, they are increasingly marginalized, even threatened with extinction.

“The reasons could be many things. For example, families whose parents come from two different regions tend to use Indonesian as their everyday language. That means two regional languages are lost in one family,” he explained.

Outside of journalism and the arts, Egy has been actively assisting Indonesia’s VP Jusuf Kalla or JK since 2007. As a cadre of the Golkar Party when JK was the chairman, he, among others, handled meetings of the peace organization called Centris Asia Pacific Democratic International (CAPDI). JK chaired that organization. Egy was an active volunteer for the Indonesian Red Cross that was and is still chaired by JK.

In 2014, he was nominated as a legislative candidate by the Golkar Party for the DKI Dapil (Central Jakarta, South Jakarta, and Overseas). Unfortunately, he failed to get elected.

“Everything has a meaning. Maybe it’s better if I take part outside of politics,” said Egy one day.

Another interesting side of Egy is his cross-field friendship network, from civilian to military. Specifically, in the military world, Egy is friends with many military officials, some of whom have skyrocketed to become generals. One of them is Lt. Gen. (Ret.) Doni Monardo. Their friendship has been woven since Doni became the first officer (pama).

Egy has highly valued and forged such friendship, regardless of the different fields of work.

As a result, his close friends were not too surprised when at the beginning of 2019, Egy started to occupy an office at the National Disaster Management Agency (BNPB) with the position of an expert staff member of then-Head of the BNPB Lt. Gen. TNI Doni Monardo. For approximately two and a half years, Doni led the BNPB with all his busy activities, during which Egy always accompanied him.

While this writing was produced, Egy said he lost count on how many thousand kilometers he had traveled with Doni, either by air or by road. If not for disaster management, he would travel with Doni for disaster mitigation purposes. The latest was all activities about handling the Covid-19 pandemic.

Of the many trips, when asked to name “only one” the most memorable travel memory, Egy spontaneously said, “Tahuna! The helicopter crash in Tahuna, North Sulawesi!”

He meant the incident when he and Doni Monardo visited the flood-landslide disaster in the Sangihe Islands, North Sulawesi.

On Monday, 6 January 2020, after a visit to an area called Tahuna, Doni and his entourage were ready to leave. Alas, the helicopter he was traveling in circled, swayed, and failed to fly. The propeller even ‘grabbed’ one Avanza car and threw it away.

Finally, Egy now chairs an institution engaging in the environmental sector called Yayasan Kita Jaga Alam (KJA) or Let’s Protect Nature Foundation. In the short term, the KJA Foundation will engage in tree nurseries. In the long-term, the foundation, which he founded with Doni Monardo, will focus on vegetation-based disaster mitigation endeavors. (*)